When most people hear something about climate change, they attribute it to a recurring, large-scale problem occurring globally. You wouldn’t think that climate change is happening in your own city. But studies show that the effects of climate change and global warming may be more close to home than one would think – even for us in central Illinois.

Despite the notorious presidential claim that climate change is a hoax, studies prove it indisputable that fluctuations in the environment pose a threat to agriculture, infrastructure, and public health as a whole. Changes are happening fast – the average temperature in Champaign-Urbana is predicted to be up to 4-5 degrees Fahrenheit higher in the coming years.

We may wonder what exactly we are doing that is contributing to our declining environment. Something we might overlook is our frequent use of certain systems of transportation, and the weighty role they play in global warming.

Personal vehicles such as trucks and automobiles are responsible nearly one-fifth of all gas emissions in the United States, discharging dozens of pounds of carbon dioxide and other environmentally hazardous fumes each time you fill your gas. Some of these vapors cause damage to the environment through the process of manufacturing and exhausting the car fuel. But a large portion of the accumulating gases – notably, the most destructive, heat-trapping gases – are ejected right out of your car’s tailpipe.

Ideally, recent inventions, like fuel-efficient cars such as the Prius, would be a better option than the standard vehicle. However, for people looking to save money while choosing more environmentally-friendly means of transportations, perhaps cars shouldn’t be the option at all.

Another alternative, and a possible solution to the excessive greenhouse gas emissions, is increasing the usage of public transportation rather than personal vehicles to get to places. While buses, trains, and other shared vehicles do emit gases, it would save a lot of energy and decrease air pollution if more people used one communal system of transportation together rather than their own personal vehicles every time they needed to get places.

Furthermore, owning and maintaining personal vehicles are simply commercially inconvenient for many – the price of gas and other petroleum products in strong and increasing demand just keep increasing. So there are numerous, constructive reasons to use more environmentally-friendly transportation rather than personal cars!

In order to further evaluate the frequency of the usage of personal vehicles in Champaign-Urbana, students and faculty at Uni High were asked to take a survey to see how they come and leave from campus. Below are the results of the survey. 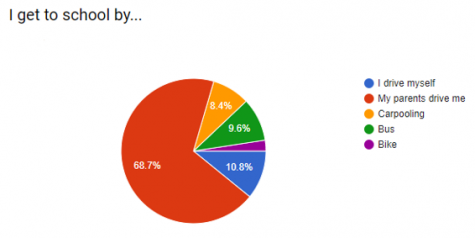 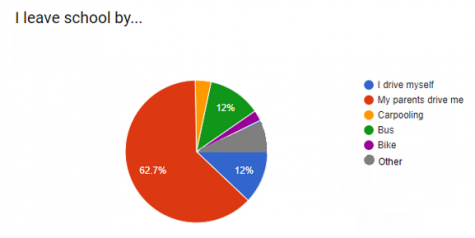 We can deduce from the graphs that a majority of students and faculty use personal vehicles rather than communal transportation, such as buses, carpooling, or other, when coming to or leaving from campus. Though limited and only pertaining to transportation on campus at the University of Illinois, these displays alone say a lot about the current climate situation in central Illinois.