As US citizens, you would think Uni students should know most of the answers to questions about our nation. However, a surprising survey conducted among Uni students shows that many wouldn’t pass the US citizenship test, and most have a shaky knowledge at best of its contents.

Sample U.S. Citizenship test questions were compiled and given to students from every grade. The average score was about 72.2%, above the score needed to pass the test (60%). This would be five out of seven questions right from the quizzes we made. However, only ⅔  of the participants actually scored above 60%. 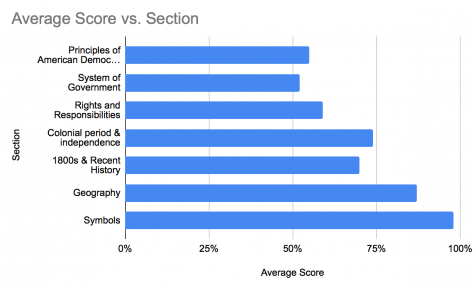 Interestingly, participants did the worst on questions about System of Government (52% right), Principles of American Democracy (55%), and our Rights and Responsibilities (59%). On the other hand, the sections about our history, geography, and symbols (our flag, national anthem, etc.) were all well above the 60% mark. Every student at Uni learned about American history and culture at some point in their childhood because of state requirements, but many haven’t revisited it since.

Prospective citizens usually have to answer up to 10 randomly selected questions from the test. Most possible questions are about the sections Uni students did the worst on, while it’s much less likely that applicants will get questions about American geography and symbols.

The concern arises looking at some of the most commonly missed questions, such as “Who is the governor of our state?” and “What are two rights in the Declaration of Independence?”. These questions seem like ones that citizens of the United States should know the answer to, regardless if they were a first-generation citizen or not. Most Uni students also didn’t know when income taxes are due, but that makes sense, considering that the vast majority of Uni students are minors.

Of course, the wording may have something to do with people’s scores on the citizenship test. The question “What do we show loyalty to when we say the Pledge of Allegiance?’ tripped multiple people up since they answered “stand up and put your hand over your heart”. Clearly, they thought the question asked, “how do we say the Pledge of Allegiance?”. 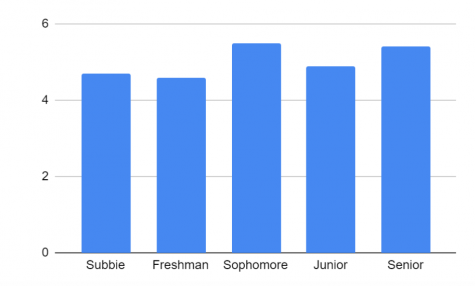 Surprisingly enough, education and Uni’s social studies classes didn’t affect the results. Older students with more years of schooling did no better. Subbies, who learn about the Constitution in their social studies class, didn’t have an advantage, nor did Juniors taking American History. These results imply that school classes, even ones about our nation’s constitution, don’t give an advantage after a certain point. Instead, the results depended mainly on each individual and their knowledge base.

Some trends did emerge throughout the results, but not very conclusive ones. Girls scored higher than boys, with an average score of 5.29 as opposed to 4.81. However, the higher-scoring gender varied from grade to grade. There were no non-binary respondents as far as we know.

Sophomores scored the best on average for the quiz, but they also had more respondents than any other grade, which could skew the results. Only sophomores and seniors had an average passing score, but it wasn’t much higher than any of the other grades.

Overall, the results indicate that Uni students know the basics of citizenship, but have significant gaps in their knowledge. Not everyone will remember principles of democracy, but everybody can say the Pledge of Allegiance.