All School Assemblies: Good or Bad? 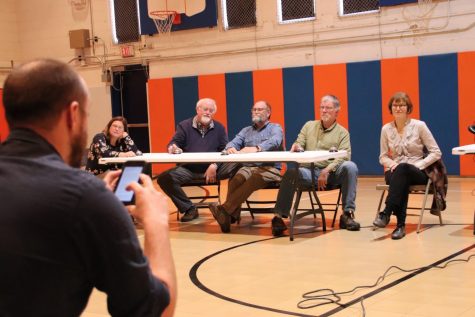 Elizabeth Majerus, Interim Director, the new director of Uni, has implemented mandatory quarterly assemblies during Uni Period. Her goal is to be able to be able to bring students and faculty together as a community. When interviewed, Majerus said, “I have felt, for a long time, that, we, at Uni don’t have enough opportunities to be in a room at one time and focus on things that are important in our community.” For the most part, students seem to think that assemblies are important, but they take up too much of the students’ time.

Even though the assemblies reached their goal for the most part, Majerus thinks that in the future, there should be more announcements, because the assemblies are also supposed to inform people of things that are going on around the school. In the interview, she said, “[…]if there are really important announcements for everyone to hear, everyone can hear them, and if there are topics to talk about, everyone gets to hear it. We can send stuff through email, newsletters, and flyers, but not everyone pays attention to those things.” There weren’t very many things to announce, because there were not many things going on around the school

In general, students did not mind the assemblies, but thought that they were pointless. A lot of people that were interviewed did not have problems with the assemblies. Shreeya Jajoo, Subfreshman, said that “I don’t feel that bad about them. It’s like okay.” When asked if they could be improved in any way, she said, “I don’t have any comments on that.”

When asked about the assemblies, freshman Lili Tiouririne said, “Assemblies in general, I don’t have a problem with. But there wasn’t really an important reason. It seemed to be there just for there to be more assemblies. It’s a waste of time. If there was a good idea then I think it would be okay to have all school assemblies.” She also said that, “I really like to sit down and actually get my work done before practice, because Uni Period when I do stuff like math re-assessments. So yeah. I was planning to do my homework.” when asked what she would have been doing if there hadn’t been an assembly.

For the most part, everyone seemed to have the same thoughts about them, although there were some varying opinions. Serenity Lilly, Sophmore, seemed to like the idea of having all school assemblies. “I thought it was good. I liked the way they did it. It was a good way of bringing the school together.” Eli Khuri-Reid, Freshman,  did not like the assemblies. “I really dislike them,” he said “I think they’re pointless. They should have put a trigger warning on the depression thing. My friend was very triggered about that.”

Majerus thinks the assemblies are the best way to bring the community together and all be focused on the same thing. She has thought about an alternative to the assemblies, however. “I was thinking about having an advisory period, that’s kind of like a homeroom, it would be a fifteen minute thing. Students would enter an advisory group as subbies, and be with that group through senior year,” she said.

In advisory groups, students would become close to the specific people in their group, and be able to hear announcements about different things going on.

Most people seemed to be against the idea of advisory groups. Max Ludaescher, Junior, said, “I don’t think it would be an alternative, because it’s everyday, and it would be a very big thing[…].” Lilly said, “I’m sure that she [Majerus] has thought about it a lot more, but I feel like the all school assembly is everyone, and an advisory group is just random people, and it might be hard to gain a connection with those people.

Most people who were interviewed seemed to think that assemblies were the best way to spread information, but not of bringing students together. Tiouririne said, “I don’t know about better, but I feel like Uni student’s in general to a pretty good job of planning things. If we had more fun things like that that don’t have to be part of a holiday, that would be good.”

Most students don’t seem to have problems with the assemblies, but they think that there are ways in which they can be improved. We have only had two mandatory assemblies so far, however, so it is hard to tell how good and effective they are.