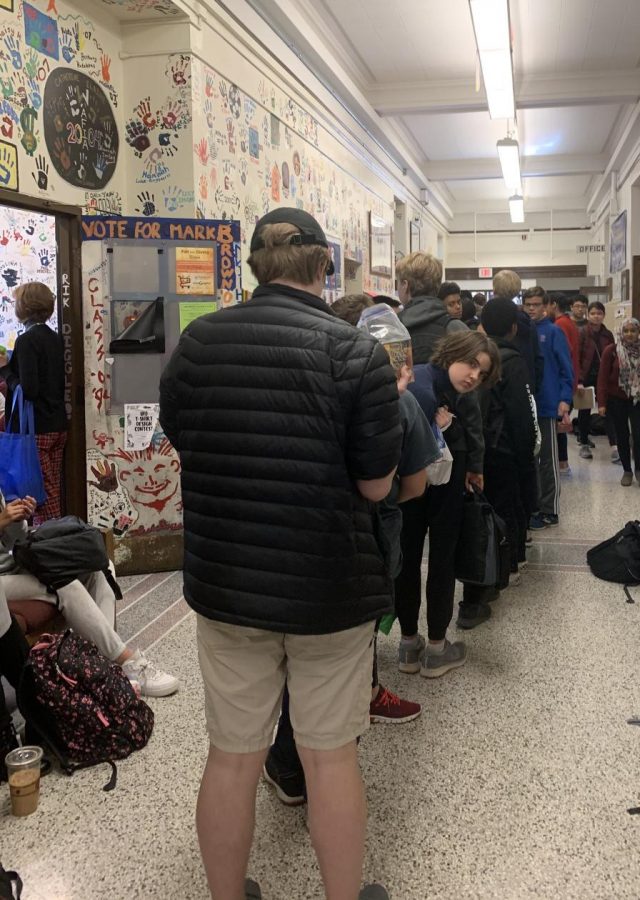 It’s almost the end of the first semester. By this time last year, we’d had dozens of food sales from all kinds of clubs. This year, we’ve had a grand total of one.

Within the first few weeks of school, news had already spread of a ban on fundraising put in place by the University of Illinois. This knowledge was often met with anger and frustration. However, most students aren’t aware of what policy stops us from fundraising, why it’s in place, and what’s being done about it.

To start with, there is a possibility that we will be able to fundraise again next year.

Uni administration is currently talking with the University to work out special permission that would allow us to hold some fundraisers each year. A proposal is being written to present to the University.

The compromise, if approved, would schedule certain fundraisers that happen every year. Elizabeth Majerus, Uni’s interim director, stated that ideally, this solution will allow a degree of flexibility as well, by having a “limited number of fundraisers that we can plan to hold with a certain amount of advance notice.” These would not have to be scheduled to happen every year.

According to Michael Adams, the Assistant Director of Business Operations at Uni, there are two main roadblocks to our ability to fundraise. The first is a financial issue with how clubs and club sponsors are handling money raised from fundraisers. Adams said that the current ban on fundraising started with the University asking questions about what clubs were doing with the money they raised.

This question led to the discovery that Uni has been violating a long-standing University policy stating that university premises and facilities cannot be used for any fundraising activities, which is the second roadblock. This is the restriction that has completely stopped all sorts of fundraisers at Uni, one of the most notable being food sales. While the policy has been in place for a while, only this year is the university truly enforcing it, Adams added.

Currently, the financial issue only affects fundraisers off-campus, where we are still technically allowed to collect money.

As long as the event is held anywhere on University premises, we cannot use it as a fundraiser. Admission fees had to be removed for longstanding events such as the Habitat Club dodgeball tournament and the Spring Club haunted house, as they were both held in Kenney Gym. As mentioned earlier, the lack of food sales is another major change due to the policy.

“It’s a way to publicize clubs. I’ve heard of clubs holding food sales that I’ve never heard of before. Also, it gets kind of everybody involved, it’s honestly fun just to bring food and serve it to people” said Rithika Patnam, a Spring leader. Rani Ramrattan, a junior and leader of the Habitat and Food Pantry clubs, has a similar view, saying “A lot of bringing classes together is because of fundraising. We have these big events, and people get to know people that aren’t just in their grade.”

Uni culture and traditions aren’t the only things being interrupted by this newly enforced policy. Food sales were more than quick, relatively cheap ways to get lunch at school. For many clubs, these sales were the main source of money they donated to charities or saved to fund other events at Uni. Clubs have had difficulties in raising the same amount of money they used to just a year ago, as a lot of the major sources of income are no longer permitted.

Most clubs are currently focusing on finding ways to work around the policy, but the restriction on accepting actual cash money means alternatives don’t generate nearly as many funds as normally charging admission might.

Both the Habitat club and Spring club asked everyone to donate the normal price of admission to their respective charities, but the money raised at the haunted house was significantly less than in previous years. According to Patnam, the haunted house had higher attendance than normal, yet only raised around $400, half of the normal $800 of years prior.

Ramrattan says the Habitat Club cannot view how much money was donated for the dodgeball tournament. However, the event is very likely to have suffered the same decrease as Spring’s haunted house.  Ramrattan believes that the issue is that “It has to be through a website server, where you donate online or something, and a lot of Uni students can’t donate online, it’s easier to just hand cash at an event.”

“It’s just kind of sad because there’s so much money you can get from Uni students for Spring Initiative and then all of that’s just gone” Patnam commented, a common sentiment among other club leaders and members.

Another alternative was found by the Food Pantry club for the Thanksgiving sale. Normally, the club charges around 5 dollars for a meal, but this year they were accepting 4 cans of food for a plate.

Although initially skeptical of how successful the sale would be, Ramrattan was “pleasantly surprised. We got three donation boxes, it’s a lot of food”.

By avoiding the collection of actual money, the club was able to sidestep the policy. Other clubs are following suit, with Students For a Better World (S4BW) holding a similar food sale this Friday, accepting hygiene products in exchange for food.

However, these types of fundraisers aren’t viable for many clubs. The Thanksgiving sale worked so well for the Food Pantry club since they mainly donate canned and packaged food to their organizations. Clubs like Habitat and Spring club fundraise for specific organizations that only accept monetary donations.

The policy isn’t in place just to make Uni students’ lives difficult. It does seem unreasonable and it unfairly affects our abilities as a high school, but the University has justification for the presence of this policy.

According to Adams, the main reason is that the University needs to display a united front. If many different departments or organizations were holding fundraisers, they may overlap or conflict with each other.

Being a high school connected to the University rather than students of the University, Uni is in a unique position. We don’t play a large role in the University, but the policy cannot just be thrown out the window for our sake. With our administration working on the issue with the University, there is a possibility for the return of fundraisers next year.