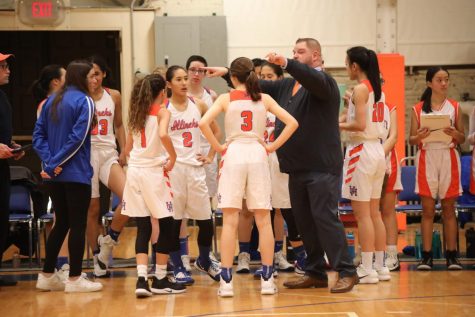 With the start of an exciting new season, the Uni High girls basketball team is currently holding a record of 5-3 as of December 4th, with sights of progressing far in regional and state games.

Sophomore and second year varsity player, Dina Hashash, described the team environment as “better than I could’ve ever imagined it, the freshmen are bringing in a lot of positive good vibes and energy, that kind of bring more energy into the team in general … everyone’s just having a lot of fun together.”

Another Sophomore and second year varsity player, Lara Marinov, agreed with Hashash stating “Off the court also and just at practice, we talk, and we’re friends, and there’s no animosity towards each other at all.”

They hope to maintain and enhance this amazing team environment as they progress further into the season.

As an ambitious team trying to get off on the right foot, players have set many goals for the season that they hope to reach.

Marinov has set her sights high, hoping to break the school record for most three-pointers made in a season, which she’d tied last year. Another one of Marinov’s goals is to “improve my game, get more aggressive, but also help teammates out and be a good team player, that’s important to me.”

Hashash is equally ambitious, with her main goals being to move the ball around more, communicate more on the court, as well as being a role model for younger players.

Led by a new first time coach, Brett Klein, the subbie boys also tackle a new season, with a current record of 2-8 as of December 4th.

With a group of new players stepping out onto the court together for the first time, it’s a challenge to quickly create a strong and positive team environment where everyone can grow and become better players. However, in the minds of the subbies it doesn’t seem to be too large of a challenge for them to handle.

Coleman Clougherty, the starting center for the team, thought their team environment is currently going “Surprisingly really well even though we’ve lost most of our games, we’re still super excited for everything” clearly demonstrating his confidence in the team’s relationships with each other.

Another subbie, Aryan Sachdev described their team environment  as “a great group of people because we have a lot of time to bond, I guess. Since we have first period study hall together, it’s extremely fun hanging out with each other.”

Sachdev said that in their opening game of the season, some players weren’t confident enough to take shots, but hopes they gain more confidence as the season goes on.

Knox Mynatt, a guard on the team, described wanting to play more aggressive this season, saying “every other year I’ve done basketball, I’ve kind of just sat back and watched everything happen.”

Clougherty said he wants the team to improve on the execution for their plays, something that is sure to come as the season progresses and team chemistry is built up.

This new season for the Subbies also brings a new coach, Coach Klein. When asked about how their new coach is doing, the players had very positive responses to the way Klein runs things.

Clougherty described his coach as “ pretty young, so he also knows the stuff we like to do and don’t like to do, so he tries to work with us a lot, and just see what we want in a game, or what we want to do.”

Sachdev also said he really liked Coach Klein’s coaching style, saying “I think he’s doing pretty well because he’s letting everyone try out different things, to see where they can do best for the team … he’s not afraid of putting in players that don’t have as much experience than others, so everyone gets playing time in games.”

Coach Klein plays to his team’s strengths, trusting their ability to grow and match each other’s playstyles.

All in all, the Girls basketball team and the Subbie boys team are both ready to take on a new season and adjust to anything thrown their way. Best of luck to both of these ambitious teams in their respective seasons.