As an elementary schooler in Charleston, a town about an hour south of Urbana, I went to the library on Wednesday summer afternoons to play chess. One of the people I used to play against a lot was a high schooler on Charleston High School’s chess team, and I remember asking him about how well the chess team would do in the upcoming season. He told me about how they were probably going to be one of the better teams in the area, and that the team even had a chance to make a run at Sectionals. Then he laughed, and told me that was until they ran into Uni High’s “ridiculously good” chess team, which was when their run would inevitably end.

Even as a twelve year old who didn’t know what Uni was, I was still able to experience the fear that Uni’s chess team struck into other schools. This has to be among the most awesome forms of outreach possible, and it left me with the impression that Uni was an intimidating school filled with brilliant students.

Having spent five years at Uni, I can confirm that Uni is indeed filled with brilliant students, many of whom would be great at chess. This is why I find it disconcerting that Uni has not sent a chess team to the IHSA tournament for the last two years. Although I’m not an expert on all things IHSA chess, I do know that those are two years of missed opportunities for placing high at at the very least Sectionals and instilling more fear into local teams. I personally would have loved to bring my novice-level chess knowledge to the team so I could learn from Uni’s resident chess experts, of which I know there are more than a handful of at Uni right now.

Along with the missed opportunities in the present, another reason I’m convinced that the chess team has to make a return to Uni is because it used to be one of Uni’s most awesome, awesome things. Just going by sheer numbers, Uni has eight IHSA state championships in chess. Faculty that I’ve talked to about the chess team have all told me that the culture surrounding the team used to be huge, and I think that is such a great Uni-sort-of-thing to happen.

A third reason why the chess team should come back to Uni is because chess is just an awesome game. Chess may not be the peak of creative, strategic thinking, but once both players get to a certain level, it’s probably pretty close. Becoming better at chess will definitely improve anyone’s problem-solving abilities, concentration, and imagination, which makes chess a great fit for the many analytical thinkers of Uni.

As the departing captain of the Scholastic Bowl team, I’ve seen the team get better every year to the point where it is today, and thus I’ve seen the “brand” of Uni Scholastic Bowl instill more and more fear into many of the schools we play. But it’s just not the same. While Scholastic Bowl’s fear factor shows that Uni has some study fiends, the chess team’s fear factor was that Uni has better brilliant strategic thinkers than your school, and you couldn’t do anything about it.

The chess team was a state-contending program, a fear-inducing form of outreach, and one of the all-around awesome things about Uni, and as a school we would be better off with it. 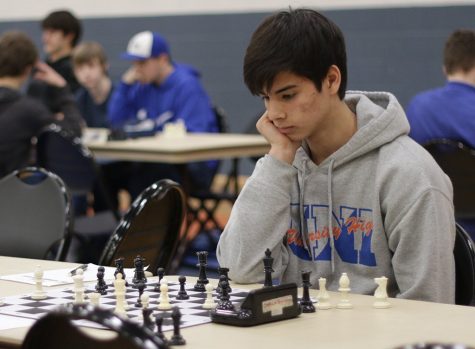