Uni students take full advantage of the opportunities provided to them– one of which is dining out on Green Street. There are a variety of options for students to patronize, so The Gargoyle set out to help make the choosing process a bit easier. We hit up the renowned Italian establishment Za’s and checked out its three main draws (pizza, pasta, and soup) to review it and help you decide whether to give it a visit or not.

Our first impression of the pasta was that, naturally, it smelled great. Although the presentation isn’t exactly what you’d find at a fine dining restaurant, the food still looked relatively appetizing. The taste, however, is what matters: the pasta itself was appropriately cheesy, with some sauce that nicely complimented the dish. The cheese flavor was one of, if not the main powerhouse in terms of taste. It was a nice, pleasant taste that stood out, but wasn’t too overwhelming. The vegetables were also pretty good. There was a lot of variety that blended well together. But we did have some reservations– the vegetables, as nice as they were, could have been integrated into the dish better. The pasta came to us with the vegetables looking as if they were simply dropped onto the plate atop the pasta with no second thought. Mixing the vegetables and the pasta together with our forks was indeed, an arduous process. While we both decided that the pasta did indeed exhibit mastery, it had a little bit to go in order to count as “exemplary work.”

Similar to the pasta, the soup smelled delicious. In terms of appearance and presentation, it was pretty simple: just a bowl of red soup with nothing much to it. The first few sips were extremely delightful, and we conceded almost immediately that it is a great soup to drink on a cold day. David, however, found that the soup got quite strong and overwhelming after a while, overwhelming his taste buds with the intensity of the tomato. Maher found the strength appealing, and enjoyed the flavorful kick to it. It was the only dish we didn’t completely finish, and our opinions varied: David approved, but found it somewhat lacking due to the intensity of the taste. Maher thought it was wonderful, with just a bit of reservation about the presentation.

We both enjoyed the pizza. It looked genuinely Italian, with spots of cheese decorating a mostly tomato-sauce-covered pizza. It was a margherita pizza (because we’re cultured), and while it was decent, Maher felt like there was something missing. There was too much sauce with an uneven distribution, and the crust was far too thin to support this sloppy construction. The taste, to him, felt watery and uneven. The cheese was a redeeming factor, however– the viscosity was pleasant. But there wasn’t much taste to any of the pizza– at least, nothing more than you’d expect. For a place that seemingly prides itself on its pizza, it could for sure be a lot better.

On the other side, David really liked the pizza. He is a pretty big fan of pizza, so he may be a little biased here. He really liked the thin crust and how the tomato sauce was the main taste. In his opinion, the other ingredients added some dynamic to the pizza, and was dispersed pretty well. “Maher just doesn’t appreciate the simple things in life,” concluded David.

In response, Maher said “David appreciates the simple things in life too much.” 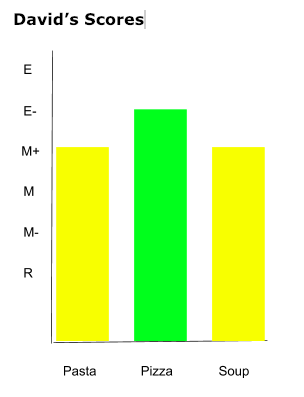 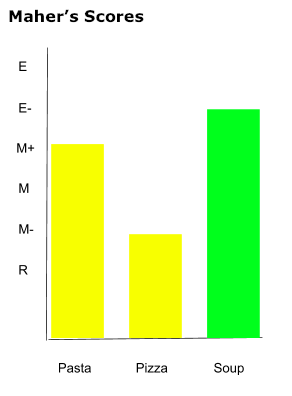