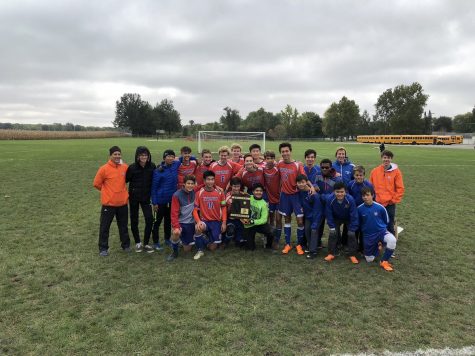 The boys’ remarkable soccer season has come to an end. The Illineks finished the season with 16 wins, 6 losses, and 4 draws. Even though the team had great success this year, coming into the season, the team had low expectations.

“After we lost so many people, we weren’t expecting to do that well, but it actually turned out a lot better than we thought,” said Izzy Gray, a senior and captain of the team. The team had lost a number of boys including Rahi Miraftab-Salo, the leading goal scorer in Uni High history. Many of the seniors, who did not have key roles last year, had to step up.

The team had a fantastic start to the season, not losing a game until disaster struck. Both senior Lawrence Taritsa and sophomore Nabeel Bashir, went down with season-ending injuries. This devastated the offense of the team because Taritsa was the leading scorer on the team and Bashir was one of the best passers. The team’s depth in the lineup was hurt badly because of these injuries, causing players to have more of a role on the team

The injuries were a setback, but the fiery Illineks began to bounce back immediately. They started back on their winning ways almost straightaway, having big wins against teams such as Urbana, Teutopolis, and Centennial, all of which are huge schools.

The team went on to win the Regional Championship, a title that Uni has held the past few years. On their way to the title, they defeated Saint Joseph, 3-0, as well as Hoopeston, 2-0. However, the Illineks finally fell in Sectionals to St. Teresa, a powerhouse in the state. The score was tied at 1-1 early in the game. But after Albert Lee, the other captain of the team, fell with an injury, things began to go downhill resulting in a 1-4 defeat. Tim Bicknell, the athletic director, says if the injuries to key players didn’t happen, the Illineks might have beat St. Teresa and would have been looking at a run at state.

The boys believe this was not the best way to end the season but they are satisfied with the amount of success they have had over the course of the year. In fact, this years’ success has made the current seniors the most winningest soccer class of all time at Uni High. Next year when this group of seniors departs, it will be like déjà vu from this year.

“[The seniors] recovered pretty well from losing a lot of people so [the underclassmen] should be able to as well,” Gray explains. Even though the team will be losing many seniors and an experienced coach, the underclassmen will still have many of the same expectations. Bicknell believes the team will aim for another Regional Championship and much more. The team will have to step up next year to fill in the roles of the departing seniors and if they are able to, Uni High soccer will continue to be great.