The Uni swimming team wrapped up their season this past weekend at the IHSA Girls’ Swimming State Championships.

The season kicked off with practices before the school year started.

“Starting off the season, we practiced for two weeks at Indian Acres, then at the end of those two weeks we had a meet that was for charity,” said senior and team captain Raine Bernhard.

“It was a relay meet so all of the events were relays, which is not normal, but still a lot of fun,” said senior and team captain Annemily Hoganson.

Team bonding was a central theme throughout the season.

“I think we were just focused on having a really fun season, which we did, and I think that just swimming really fast is just an added bonus,” said Hoganson. “We had a party at the beginning of the year, and we had a party at the end of the season. We always go big for the (Habitat) dodgeball tournament, so we made the shark sweatshirts. We also do bonding in practice. We do a lot of ‘social kicks,’ where we all kick together and just chat instead of going fast.”

The team reached a major milestone this year by placing first at the Twin City meet, which Bernhard said “is a really big deal.”

“Central has won for the last five years, and they were so sure they were going to win that they didn’t event bring the trophy with them to the meet,” said Hoganson.

The team went on to IHSA Sectionals, where they had an impressive second place finish behind Centennial. This result is more impressive considering that swimming has no divisions so Uni competes against much larger schools and that Uni had fewer divers in a competition where diving makes up a significant part of the scoring.

“We won the swimming part but they score swimming and diving together, so we lost because the other team had one more diver than we did,” said Bernhard.

“Reed and Sally, they’re stepping up every year, bringing it every year, I mean they’re going to state and they broke pool records and meet records at Sectionals, and they’re just doing great,” said Bernhard.

Much of the team’s success can be attributed to the large size of the team and each team member’s dedication to improvement.

“One reason our team is so great is that we’ve been able to recruit a lot of people and so we can have people who can really focus in on one event,” said Hoganson.

“The whole team has done really well and has dropped a lot of time. Everyone dropped time. Every single person,” said Hoganson.

“It’s kind of unheard of for a school of Uni’s size to have that big of a swim team,” said Bernhard about her twenty-one person team.

One could say that this season went swimmingly for the Illineks. 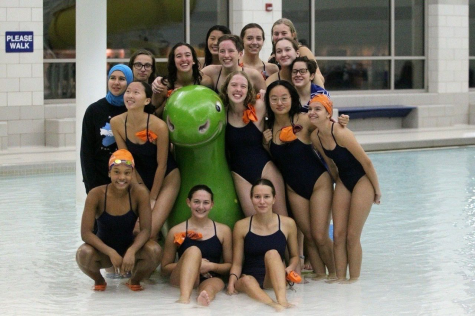