Uni Homecoming through the years 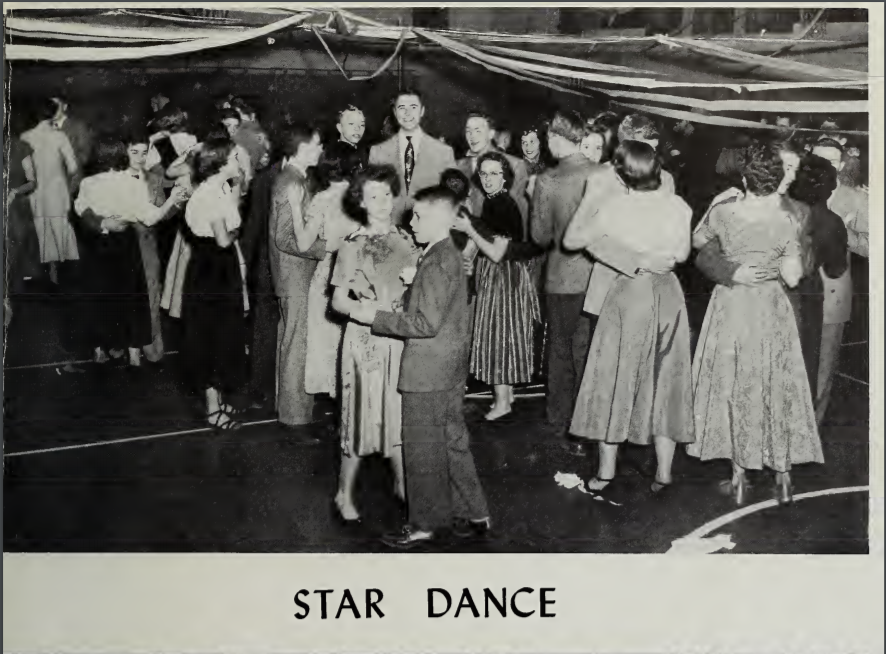 Student Council ran into a variety of issues with the planning, since the administrators at the Champaign Country Club have had trouble with correspondence and communication. Other possible locations were not an option because of their small size. Additionally, poor speaker quality ruled out the Urbana Country Club. Issues with paperwork also played a part in the event planning, since the guidelines as laid out in the Special Events Form require approval a month in advance.

Originally, the dance was scheduled for October 20. After some debate over whether the dance should be Uni affiliated or not, and trouble finding chaperones, the date was moved to allow more time for preparation.

Although Homecoming may seem like a long-standing tradition, it was only introduced at Uni in 2015. However Uni has held other fall dances such as Fall Ball, Hallowe’en Dance, Jack-O-Lantern Jump, or any other autumn-themed name. Yearbooks throughout the years have listed many variations on the same theme, but there was never a running tradition of Homecoming until very recently. A variety of seasonal dances are held each year, depending on which classes or clubs want to organize them. Currently, Student Council has been planning Homecoming, but other dances are in the works for later in the year.

To celebrate our upcoming dance, here is a short history of dances at Uni.

There were many parties in the first years of Uni, often hosted at individual students’ homes. Each class had individual events, but multiple all-school parties were held as well. The subfreshman, freshman, sophomore, junior, and senior classes held dances, in addition to multiple seasonally themed celebrations. Old yearbooks list as many as nine or ten events like this each year, a far cry from the three dances that Uni held last year.

Dances were more extravagant than just a room with a dance floor and some water on the side. The yearbooks often refer to “elaborate decorations and refreshments”. For a May Day-themed dance, there was a Maypole, and for a Christmas dance, there was a large Christmas tree, someone dressed as Santa, and a whole orchestra. Halloween dances had real cornstalks and pumpkins as decorations. A spring-themed dance had “striking Spring mural decorations” and “organdy butterflies”. One early yearbook mentions there being over 300 sandwiches left over from a dance! The yearbooks hold many references to dances throughout the years, including original work by students, which show accurate historical perspectives from the times they were written.

A student-written poem from the very first Uni yearbook gives some insight into what dances at Uni were originally like.

At seven some of us were there; our guests were due at eight.

‘Twas the Sophomore-Senior party; we hoped they’d not be late.

The programs bore our colors gay, the purple and the gold,

There were music, games and dancing, later doughnuts and cider cold.

The music at dances has changed as well. In the 1920s and 1930s, some dances had live orchestras for their music, while others played records. Swing and jazz music were very popular.  In the free-thinking 1960s and 1970s, it was not uncommon to have a local band come and play for the students, in addition to records. In the 1980s, Uni students loved to dance to New Wave music and punk. Uni alumna Kimberly Seitz Beachey recalls, “Stairway to Heaven ended every single dance when I was there (1980-1985)”. Later on, post-1990s, hip-hop and other newer genres became popular. Currently, students set up speakers with a playlist of current pop or rap music, with a few older favorites mixed in. They often have a student act as a DJ to curate music as well.

It was easier to plan and orchestrate dances in Uni’s first years, when the student body was much smaller. With only 20-30 students in each class, students could have smaller venues and fewer supplies for their dances. People could hold dances in their homes, since so few people would be attending. It was also simpler to plan a dance in the first place, since the faculty didn’t regulate dances as heavily. Yearbooks only mention extra rules being added and restrictions being placed on behavior at dances since the early 2000s and beyond.

First, in 2007, there were rules banning grinding or similar dance styles. The yearbook from that year mentioned the controversy saying, “Early in the year, Assistant Director Sue Kovacs sent out an email to the student body, instructing: “There will be no bumping and grinding. If you do, you will be sent home and will not be allowed at the next dance.” The crackdown, which began during the first faculty meeting, spawned a great deal of hostility from most of the student body and quickly became a controversial topic”. Though students protested, dances still had high attendance.

However, the issue returned over the next ten years, as seen by Dr. Radnitzer’s 2017 school-wide email: “There are types of dances that the school considers unacceptable and inappropriate.  One type of dance is called “Grinding”. … I will ask the student or students to leave the dance and I will have a meeting with the parents at a later time.”

Later, students were not allowed to enter a dance again once they had left. There were also heavily tightened regulations about student fundraising (so many dances could not be Uni-affiliated), and holding dances in the hallways, among other things. Uni’s 2015 yearbook wrote, “None of the dances, with the exception of Howdy Hop, were held in the Uni first floor hallway due to new rules. One of these rules prevented students from fund-raising, causing most of the dances to cost little to nothing…”. These stronger restrictions most likely came about after the financial crisis a few years ago, which led to many rules being tightened or reworked.

Though times have changed and rules may be stricter, Uni students have enjoyed dances from the very beginning and still love attending them today. Nearly 100 years have passed since Uni students first started it, but the Uni tradition of dances is going strong.