Students “hoppy” that hard work on “The Frogs” paid off 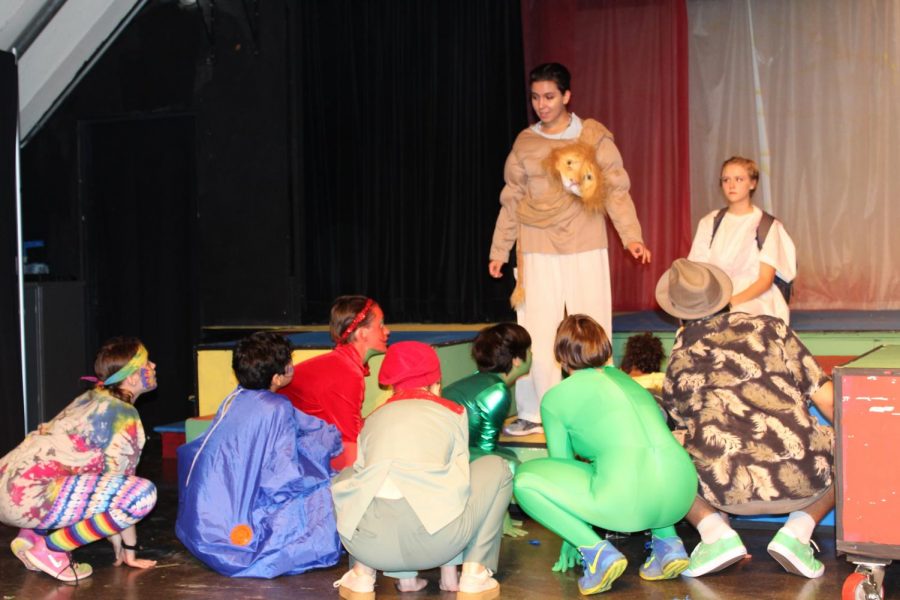 The fall play The Frogs: A Modern Adaptation by Don Zolidis, based on the classic Aristophanes comedy play, was performed October 4, 5 and 6. The play’s tickets sold out for its Friday showing.

The performance was directed by teacher Chris “Fing” Guyotte and starred seniors Cocoa Afonso as Dionysus and Xanthe Brown as Xanthias.

Fing sent emails to the school describing the premise of the show as the following:

Dionysus, god of Theatre, Wine, Fertility and other things, is unhappy with state of current culture. He and his faithful slave Xanthias, head to Hades to bring back Shakespeare. While on their quest to restore culture they are stopped by the frogs and forced to make promises they don’t intend to keep. All Hades breaks loose. All. Hades. Breaks. loose.

Overall, the audience enjoyed the play. In particular, said senior Nathalie Stein, “I thought there were a lot of talented newcomers. A lot of younger students surprised me.”

Over several weeks, the cast and crew worked hard on the show.

“We spend about a month and half preparing for a play,” said junior Elizabeth Rienstra, the stage manager for the show. “We go from blocking scenes to working them, and eventually we go off book and work in tech until we open.”

At times, rehearsal is intense. According to Afonso, who played Dionysus, sometimes “you’re at school for almost 12 hours, and you’re exhausted, and you’re coming up the stairs towards the North Attic thinking about college apps, and it seems like everything sucks.”

But the hard work is worth it.

“Then you open the door and you see everyone there, playing games and laughing,” said Afonso. “You suddenly forget that you’re tired, and suddenly you would do it all over again for that moment.”

Rienstra agreed. “This show was a really smooth process all around, and it pulled together really well. Everyone was really committed to doing their best and it definitely paid off.”