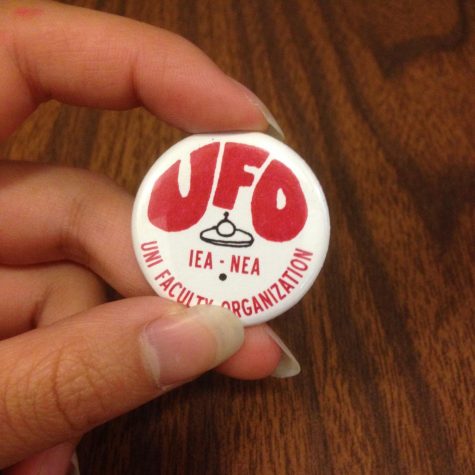 The faculty union, known as the Uni Faculty Organization (UFO), held an information session for students on Wednesday in the school library.

The UFO Bargaining Team was invited by seniors Nathalie Stein and Bella Solis to explain the negotiating and bargaining process, as a part of the “Agora Unleashed” series in the library.

Board members Melissa Schoeplein, Juan Socarras, Phillip Ernstmeyer and Matthew Mitchell discussed the union’s negotiations with the University of Illinois, the difficulty of getting a contract, and what the UFO’s goals are. More of these details can be found in a previous Gargoyle article.

“Let people in authority know your feelings on this issue, if you are moved to do so,” said Mitchell to students, who received handouts about how they can contact University administration.

Juniors Emi Loucks and Ethan Ashbrook were among the students who attended.

“I learned today that the meagerness of teacher salaries at Uni is actually driving away existing Uni teachers and repelling potential candidates who have a lot to offer Uni,” Loucks wrote in an email. “The salary issue is affecting our quality of education.”

But she didn’t just learn about how the UFO’s demands would affect students.

“It is outright unfair to the teachers, particularly those with well over one or two decades of experience and dedication,” she said. “[Some] incomes are less than 45k a year […] Our teachers deserve more than that.”

Ashbrook first heard about the UFO in Latin class, when his teacher Brian Lauthen, a member of the UFO, mentioned that teachers didn’t have a contract for their salaries.

“We all started to get a little concerned,” Ashbrook wrote in an email. “It seemed bizarre that the teachers at Uni were making so little and having such a hard time changing that, especially considering how dedicated they are to Uni and the students.”

After the event, Ashbrook was still concerned about the future of the UFO and whether the University would take them seriously. “If things really do take a turn for the worst, the most they can really do is go on strike. But […] what would the damage be [to the University] if they stopped teaching?”

The UFO is hopeful that it won’t get that far, but negotiations with the University have been difficult. “We’ve heard ‘we’re not interested’ a lot,” said Schoeplein.

Nevertheless, the UFO appears to have the support of many students.

“We still get off-track in Latin talking about it,” Ashbrook said, “since I think everyone believes that the teachers deserve more respect than what they’re being given.”

An earlier version of this article did not mention students’ role in creating the event; this has now been corrected.