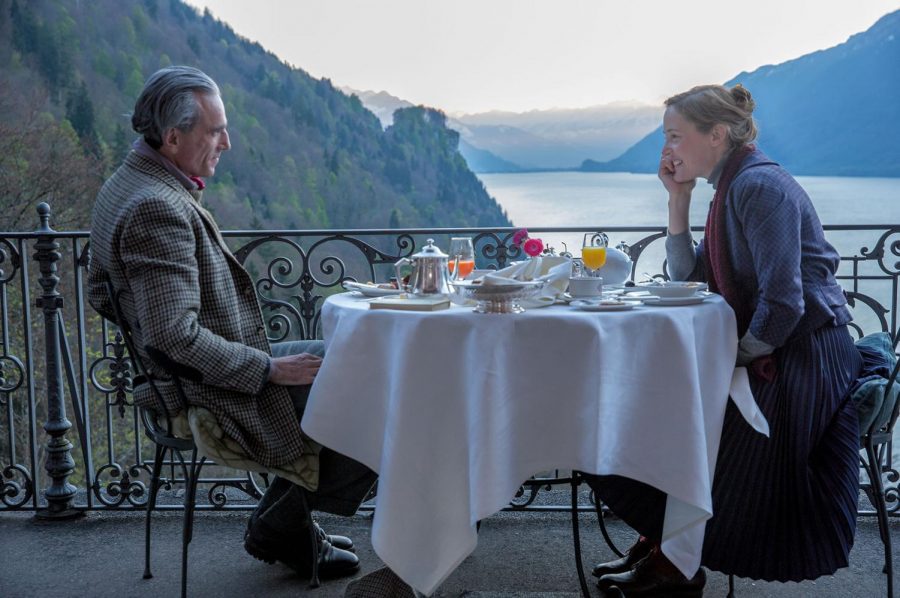 Phantom Thread is far eerier than it has any right to be. The film, which marks director Paul Thomas Anderson’s second collaboration with Daniel Day-Lewis, dares you to dismiss it as plain.

Day-Lewis plays Reynolds Woodcock, an obsessive-compulsive dressmaker who attempts to adjust to life with Alma, his new lover and muse. The synopsis may read like a bad episode of Downton Abbey, and for the better part of the first act, it is. The introduction to Woodcock’s life is somewhat tedious despite the stunning visuals. His meeting with Alma, which concludes the first chapter, is rife with dialogue from the uncanny valley, ripped from the pages of a John Green novel. But between the tense notes of piano, alluring clinical colors of Woodcock’s workshop, and Day-Lewis’ magnetic portrayal of a man married to his work, Phantom Thread manages to establish a compellingly tense tone.

All told, the eerie tension built in the first act holds the viewer long enough that Anderson and Day-Lewis can begin diving into the mind of Woodcock. Bit-by-bit, the director-performer duo drop in details of Woodcock’s fascinating artistic process: the necessity of routine, how every moment is spent thinking of dresses, and the meticulousness of his craft. Meanwhile, they give us snippets of the darkness under the surface, revealing the weight of his mother’s death, his unhealthy reliance on his sister, and his unwillingness to allow anything to break his established pattern. Together, they weave a portrait of an artist fragile enough to collapse at the lightest touch.

Day-Lewis’ performance is a clear favorite for Best Actor. He immaculately crafts Woodcock’s genius with every gaze and penstroke. Though he doesn’t make Woodcock a figure of unquestionable brilliance, the tenderness in his voice and angry fidgets remind us that Woodcock is, at his core, a boy looking for his mother.

But don’t mistake this as a movie about Woodcock. The movie is ultimately about Alma, played by Vicky Krieps, who impressively holds her own against the seasoned method actor. Alma is an unwelcome interruption in Woodcock’s life of routine, but while it initially appears that she is merely a victim of circumstance, her agency quickly becomes apparent. Behind the cutesy facade is a woman hungry for unilateral control of her relationship. Kriep’s precise balance between the tender, young lover and the psychopathic girlfriend makes Alma a terrifying and formidable opponent for Woodcock.

Anderson stages this constant battle for power beautifully, playing with ominous color schemes. He foregrounds Woodcock’s initial routine against clinical and crisp whites that are progressively consumed by vibrant and darker hues as Alma wrests control over the broken man.

The result is a fiercely creepy exploration of the dynamics of a romantic relationship. One that, despite its slow start, leaves the viewer with an intensely unsettling feeling.