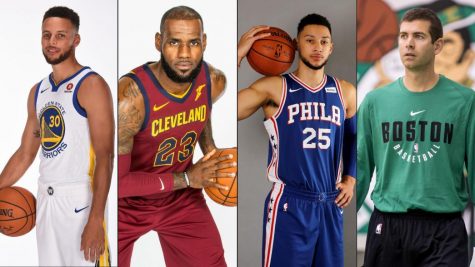 The NBA season is finally upon us! In fact, it started earlier than usual this year, as the first game tipped off on October 17. To start the season, last year’s runner-up Cleveland Cavaliers will play host to the Boston Celtics at Quicken Loans Arena to set a competitive precedent for the rest of the year. Along with this competitive attitude, there is a lot of excitement when it comes to talking about potential champions and MVPs.

This year, the entire schedule appears to be geared with an eye towards health and longevity, which is no doubt exciting news for the players. Previously, team schedules occasionally had 4 games in 5 days, which is very strenuous, even at the NBA level. However, the NBA has long refrained from the resting of superstars, as it has a negative effect on ticket sales.

In addition to a new schedule format, for the first time in the NBA’s 72 year history, the All-Star game has a completely new format, with the rules taking effect for the 2018 game in Los Angeles.

Under the new system, two captains will draft players as starters and reserve players.The leading vote-getter from each conference will serve as the captain and will get to pick their teammates out of two pools. Also, the teams will play for local charities, adding incentive to the game. Before, the best players from each conference were chosen by the fans, media, and coaches to play together on one team.

Other things to look forward to is watching top teams contend for the title. According to the Yahoo Sports analytics team, The Golden State Warriors open as overwhelming favorites to repeat with 5-11 odds, with their perennial whipping boy Cavs coming in second at 4-1. Other contenders include the San Antonio Spurs (8-1), the Celtics (10-1), and the Houston Rockets and Oklahoma City Thunder closing out the top six at 25-1.

Competing for last place at 1000-1 odds are the depressing Orlando Magic, the laughable Brooklyn Nets, the pitiable Chicago Bulls, and the depleted Atlanta Hawks.

Despite the Warriors recent rule over the NBA, there are other potential title contenders this season. In the East, the Washington Wizards and Cleveland Cavaliers look poised to have a strong season, following trades that resulted in a well-balanced team with good chemistry. The Milwaukee Bucks, Toronto Raptors, and the Philadelphia 76ers feel like teams that have something to prove with lots of returning talent and experienced coaches.

The West is a different story. Four of the top six teams listed above are in the West, and from there it’s a sharp drop off. The Minnesota Timberwolves, Denver Nuggets, Memphis Grizzlies, Los Angeles Clippers, and Utah Jazz are all vying for the playoffs. However, nobody believes that any of these teams have a serious chance at knocking off the Spurs, much less the Warriors, in the playoffs, but it will make for some entertaining games down the stretch. All of these teams should top 40 wins and could finish with a winning record.

“LeBron’s a man on a mission. Beat by the Warriors in The Finals for the second time in three years and disrespected by Kyrie Irving in the summer, he needs to remind the world that he is the best player in the game. And since the Warriors will keep him from claiming another championship trophy once more, he’ll have to settle for the individual hardware.”

With all of that said, it’s much too early to officially crown a champion and MVP yet. Even with the less strenuous schedule, injuries can happen at any time. And in basketball, sometimes all it takes is one key injury or one surprising breakout player to offset the NBA completely. The only thing that can be said for certain is that fans should be excited to watch some professional basketball.