The influx of rolling furniture at Uni High

In the past years, Uni has added rolling desks, chairs, and tables to the following four rooms: 106 North and South, 109, and 308. According to Marianne Downey, Director of Advancement at Uni, the new furniture is part of a campus-wide initiative to transition classrooms to an active learning model. The goal of an active learning classroom is to promote a “student-centered, collaborative learning activities” with a strong emphasis on technology.

The chairs and desks are supposed to be an integral part of the collaborative learning process with wheels present on all the legs, creating portable furniture.

Mr. Wilson, discussing the role of the portable furniture in his Junior/Senior Intro to Cultural Anthropology, says “[the students] can do group work, I can break them up, they can get into a circle. I can do all the different things I need to do in there with those desks. It’s great.”

But not all the new desks are structurally stable as the desks in 106N fall over if too much stuff is put on the table creating inconvenience for teachers and students in 106N. 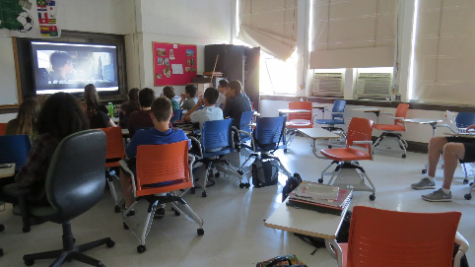 One complaint from some teachers is that the younger students are more prone to fidget in their chairs, but further into the year, students stop moving around as much. Ms. Rodems says, “The first week and a half it was this novelty. (…) [The students] would just move constantly. (…) I feel like that’s worn off; I hear the squeaking less and I think students are moving less.”

Pomona Carrington-Hoekstra echos the above points, mentioning that the chairs seem to be a distraction to many students.

Another problem is that because their size is bigger than traditional desks, it is harder to take tests with bigger classes. Buck says, “for bigger classes, [the students] would just be too close together. To remedy the problem, teachers have to split the class up and send one half to another room.

Although the overall popularity of the chairs between teachers is positive, some students express negative opinions of the chairs and often strikes them as a “waste of money” which Vicente Aldunate puts it. Although he to finds it “funner to lean back in,” he thinks that the money could’ve been spent on something more useful.

Senior Kathryn Dullerud, says that classrooms with rolling furniture are not being utilized to their fullest extent. She points out that discussion based classes, like English courses, do not make full use of rooms. Mr. Mitchell’s 20th century course uses 218 during second and Kenny Gym’s classroom during fifth. Both of which have no portable furniture while 308 with portable chairs is empty during fifth period.

Whether you like the new furniture or not, more will be coming in the following years as the advancement committee sets aside more rooms to be renovated. But there will be a difference in the chairs we put in the rooms as the main complaints of them is that they move around too much due to the wheels.