When someone walks into Uni for the first time, one of the first things they notice will be the open, unlocked lockers with books and backpacks leaking out of them. This is due to the trust most students have with one another, and there is no worry of their stuff getting stolen. In addition, they enjoy the ease and convenience of not having to unlock and lock their lockers between every class.

“It makes life so much easier,” says sophomore Faizah Rauther on the topic.

These things may sound great, yet there may be a darker side to the open, unlocked lockers of Uni High.

To begin, take a look at any Uni students’ email, and you will quickly realize is is cluttered with countless emails of someone losing something, and asking others to return it to them if they find it. Luckily, most items are eventually found. However, students do often go multiple class periods without needed materials. This is usually just a minor inconvenience, but the consequences may sometimes be costly, like losing your calculator the day of the big math exam.

However, sophomore Faizah Rauther believes that the unorganized lockers do not contribute that much to the lost items, and that it is more of individual people being unorganized. “I think it’s more of certain people just not being organized,” she says.

In addition, students sometimes lose homework assignments due to this issue, often times impacting a their grade.

“I completely lost my Latin paper,” said subfreshman Ella Greer. Yet she later says that unorganized lockers probably did not cause this as she says she’s “…just a very unorganized person.”

Although never used, Uni students were still given locks up until the start of last year, but a negligible amount of people actually used them, or even knew their combinations. This became an issue at the end of last year, as many subbies (who were still required to have locks) could not find their locks when they needed to turn them in, and ended up having to pay for them.

Even though Uni High is a relatively small school, there are still problems with traffic in the hallways, specifically on the third floor. Whether this is because of the messy lockers or not is debatable.

Ella Greer believes that, “(there) wouldn’t be that much of an issue if the backpacks were kept in the lockers.” However, sophomore Erin Minor disagrees, saying “It’s more the people than the backpacks (on the floor).”

Moreover, sophomore Samaia Jones believes the items in the hallway may be more of a safety issue than an inconvenience, calling the backpacks in the hallway possible “fire hazards.”

The whole reason Uni students keep their lockers open is because of the trust in one another, but that does not mean kids at Uni are immune from stealing. When asked if their were any stealing from lockers at Uni, all Uni students spoken to admitted that there was, but that it was never done with bad intentions. They said it was usually “food”, or taking a material that they needed for another class, but then then giving it back right afterwards. These things may seem harmless, but may sometimes lead to students freaking out as they believe they lost something, or having to go a lunch period without their Snickers bar they had been waiting all day for.

Despite all the issues the open lockers may cause, most Uni students believe they provide more good than harm.

“I would be miserable,” says Jones referring to what it would be like to have to keep lockers closed and tidy. She says the lockers make things “easy” and “convenient.”

Nonetheless, the unlocked and open lockers of Uni High are iconic to the school, and will likely stay for a long time to come. 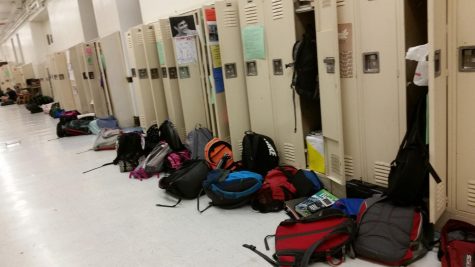