Taking a second look at sculptures near Uni

Every day Uni students traverse campus, whether it is a walk to Kenney, a 100 meter run near the ECE building, or a food run to Green Street. Thus, they may be familiar with a couple well-known sculptures that they walk past everyday. We see (or unconsciously register) these sculptures every time we walk past them. However, what do they symbolize? Let’s take a look! 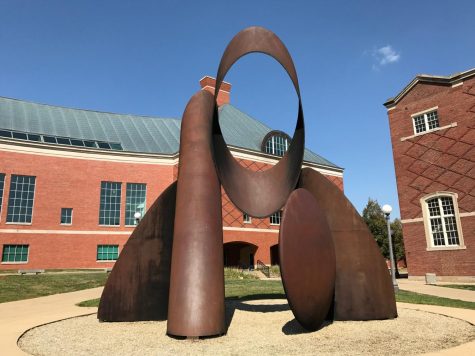 What it is: Mananaan is a sea deity in Irish mythology. This towering sculpture is an assortment of precariously balanced shapes covered in a layer of rust. Simultaneously reaching skywards and anchored to the ground, it serves as a symbol for engineering, a profession grounded in science but has infinite possibilities and applications. Perhaps the rust is an homage to early engineering and manufacturing disciplines. Although rust is conventionally seen as “imperfect”, it is a material that will last forever, preserving a unique and raw image of engineering. Whether it evokes awe, inspiration, or fear is completely dependent on the viewer.

What it is: This sculpture depicts three silver wires topped with three bronze wire connectors. According to Adduci, the sculpture is meant to allude to the connections that engineers make in their work. While a connection in engineering may typically remind you of a circuit or wire, perhaps this sculpture also alludes to real life connections that can be made through electrical and computer engineering. The three wires are intertwined and pointing in different directions, symbolic of the collaborative aspects of engineering to produce a myriad of different ideas. 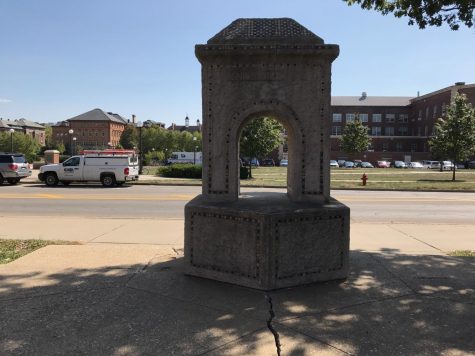 What it is: A long-standing tradition (though currently inactive) has been for the graduating class to raise money for a parting gift for the University. Past gifts have ranged from urns, bell towers, buildings, barbecue pits, furniture, and trees. In 1909, the senior had Class architects design a water fountain for Kenney Gym. Although the water fountain was sealed in the 1980s, today it still serves as a nice decoration!

Sophomore Eli Garrett says that Mananaan reminds him of the solar system because of the circular shapes and the telescope-like cylinder. Junior Betsy Ruckman says that from a certain angle it looks like a percentage sign, and Senior Omeed Miraftab-Salo says he sees balance, peace, and harmony in the precarious arrangement of each shape.

Connections is seen as a sign for the growth and commonality of technology.

Miraftab-Salo takes note of the depiction of the wires erupting out of the ground as a representation of the “uprising” of technology, while Ruckman criticizes the arrangement of the three wires, saying that they are not efficiently or correctly arranged in the manner that an engineer would use them. Eli Garrett observes the differing directions of the wire tips, saying that they are pointing to outlets everywhere, indicating how technology is everywhere.

As for the Kenney Gym senior gift, Senior Robert Chen says “It just looks like an arch with a pedestal”.