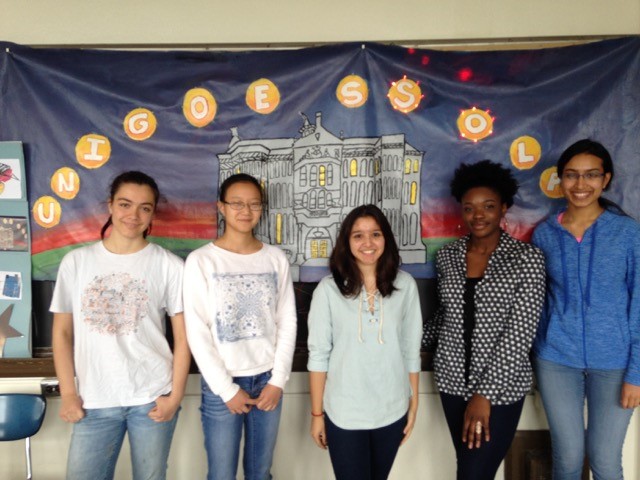 On April 28, TREE (Teens Representing Environmental Education) Club hosted Solarbration, an event commemorating the anniversary of the installation of four solar panels onto the roof of Uni Gym. The event itself was created in order to “educate the entire student body and the Uni community about renewable energy and [. . .] our solar PV system that we have” said Sharlene Denos, a Uni science teacher and the sponsor of TREE Club.

For the event, TREE club planned to make a banner with LED lights on part of it. To set up the lights, TREE club approached We Build Club, also sponsored by Denos, and led by Nina Galvez. “We had [the banner] running off of solar energy,” said Galvez, “but for the Solarbration this year we could not, cause it wasn’t sunny.”

The banner was hung up in room 303, where Solarbration was held this year, and Denos and Galvez hope to soon waterproof it and hang it outside of Uni.

“We need to have a charging station, in order for it to operate consistently,” said Denos. “. . .The plan that they have is that the banner would. . . light up. . . every quarter hour. . . and so that doesn’t require a lot of energy. . . and then that allows you to collect all the light energy over that 15 minutes to then power it again for the next iteration.”

The design for this banner came from a contest held during the first Solarbration, on Sept. 30, 2015, a month after the panels were installed. During the event, they looked at different ideas, and Denos recalled a specifically memorable design of Mr. Stone, the biology teacher’s, face. In the end, they decided on a design with a drawing of Uni, backed by a sunset, with “Uni Goes Solar” spelled out in LED suns above the building.

The concept of an annual Solarbration came up in spring 2015 when TREE Club applied for a grant from the Illinois Clean Energy Community Foundation. The application process required the applicants to make suggestions for future events they would hold. These events were meant to spread the word about solar panels and renewable energy. Sruti Ekkirala and Raphaelle Mboyo, TREE club’s leaders at the time, suggested and then held events such as Solarbration and an energy conservation competition.

Though Uni’s solar panels produce less than 1% per month of the energy Uni uses as a whole, combined with programs at the Champaign Public Library, and at the Urbana Farmer’s Market, they succeed in educating people about renewable energy and energy conservation.